STAY CONNECTED WITH US

Why Inverters Save You $$$ Inverters are the hottest trend within the world of cooling systems. But for those of us who are used to our old, faithful air conditioners, the idea of installing something brand new can be a bit jarring. And why should you spend the extra money for an AC system you’ve never heard of? Let us be the first to tell you why you need to hop on the inverter train ASAP.

Inverters can be explained using a bell curve, which mirrors the average heat load (think temperature variance) throughout the day. It’s coolest in the mornings and evenings and, obviously, warmest in the afternoon. This same bell curve can also be applied to the heat load throughout the year, especially in states with super hot summers and cooler winters.

The actual work performed by your air conditioner can be represented by a line going through the bell curve (see red line below). Most systems offered today are single-stage systems, which are built upon the same technology that air conditioners were invented upon. AKA, they haven’t changed very much in the last 100 years. This type of air conditioner only works optimally at two times throughout the day, or where the line intersects the curve. This is because a single-stage air conditioner is either on or off and delivers a constant cooling load no matter what- unless it’s broken, of course. This is mainly why your energy bills are so high, especially during the hottest times of the year. Your old-school AC system works is simply not built to work in an efficient manner, as it doesn’t adjust its workload when conditions outside vary.

This is where inverter air conditioners (pictured in green below) come in. Inverters are built to work in accordance with the natural variance of temperature throughout the day. They constantly measure how much air and cooling they need to deliver in order to achieve an optimal temperature. This means that they work at a flexible rate, so they’re never overworking or underperforming. Further, these systems are much better at regulating the humidity in the air than even the best air conditioners. Certainly everyone in Florida understands the annoyance of high humidity– inverters remedy that problem significantly (at least within the household). Overall, inverters ensure that you’re comfortable while you’re saving money on electric bills.

In addition, inverters are super cool because they maintain a consistent temperature throughout the day. You might have noticed with an older unit that you’ll start to feel a little uncomfortable at various points- specifically, you’ll feel a little too hot right before you notice your AC kicking on. On the flip side, you’ll feel the need to find a blanket right before your AC turns off. Inverters eliminate this problem by cycling less per hour, which helps you maintain a consistent temperature. Meanwhile, traditional air conditioners frequently turn on and off, which decreases their lifespan– an average AC unit only lasts about 10 years. Inverters are built to last considerably longer than traditional air conditioners, primarily because they’re not wasting energy over-cycling. With an inverter AC system, you’ll inevitably save money, because it doesn’t require a lot of power to turn on and off throughout the day. And power = money.

But What About Two-Stage Air Conditioners

Some of our customers ask if two-stage air conditioners are an “in-between” option, ie. less advanced than an inverter but more efficient than a single-stage system. The simple answer? Not really. They are marginally more efficient than a single-stage system, but only because they’re working optimally at four times during the average day instead of two. Think of a single-stage system as a car built to drive only 100 mph. A two-stage AC system is similar to a car built to drive at only 80mph and 100mph. So sure, it’s a little more efficient. But it still doesn’t make up for all of those other speeds at which you drive your car, and it certainly doesn’t help save you much money. If you’re going to advance beyond a conventional system, there is little to no point in installing a two-stage air conditioner. Inverters are truly the way to go if you want to save money long-term.

Replacing your air conditioner with any new system is costly. However, when you install an inverter, you’ll typically make up the extra cost within two years, which leaves you with the rest of your system’s lifespan to make some extra money. So why waste money on an old-school system when you can get the system of the future with a great return on investment?

If you’re interested in adopting the newest technology within the world of Tampa air conditioning, contact Air Express today. We might not be able to give you Top Gun-level swag, but we can save you money on your energy bills, which is basically the same thing… right?

If you’re interested in reading more about inverters, check out what one of our customers had to say post-installation! She loved the way her inverter AC made her home smarter and more efficient. 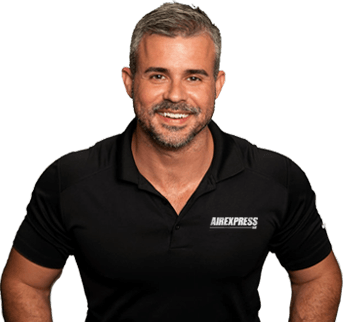